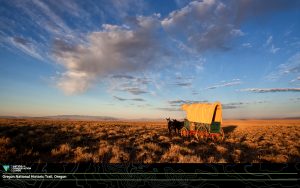 The Oregon Trail was an amazing trek across the plains, desserts, wilderness, and forests to reach a place where folks could settle down and stake a claim on land on the other side of the Appalachian Mountains. Many Native American Tribes decided to either side with them, or fight for their land which had been promised to them by King George II during the late 1700’s. Some of the most historical and beautiful sights are found along the Oregon trail; which is exactly what we going to learn about today! 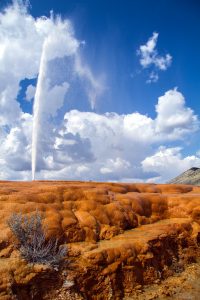 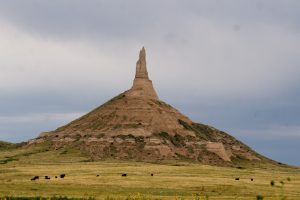 Our first stop on the Oregon Trail will be Soda Springs, one of the most loved and excitable places to be for the Pioneers. Soda Springs is in Idaho and was a famous stop as the Pioneer ventured towards Oregon or California. Known for its bubbling water filled with iron and carbon dioxide, another factor people often don’t know about Soda Springs, unless they have visited this historical site in person, is the sulfurous smell that many a pioneer talked about in his/her journal.  This bubbling water is due to volcanic activity underneath the earth’s crust. They even began using the water for medicinal purposes, even though if consumed in enough amounts could make the person or animal sick. Other uses such as bread making, and washing clothes also became ways of using the natural recourse to their benefit.

Next, we shall venture along the way to the gorgeous state of Nebraska to another well-known sight called Chimney Rock. Chimney rock can be seen for miles around, and is noted for the tall, and quite unusual, pointy chimney-like rock figure going straight up. Many journals belonging to pioneers and emigrants have stated the magnificence of Chimney rock. And a good many artists also spent much precious time painting it, and thanks to them we now know what it looked like centuries ago. 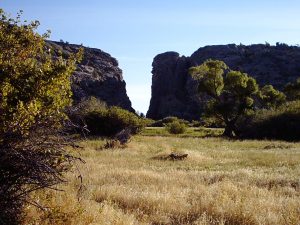 Our third stop will be a place no pioneer dared venture except for 18-year-old Caroline Todd. She with three other women climbed to the top of Devil’s Gate to look beyond the horizon. Unfortunately, this was the last time Caroline would look anywhere, as she ignored the wisdom of her fellow friends and looked over the cliff. She fell to her death and was buried in the chasm. Her grave is marked with this poem –

“Here lies the bones of Caroline Todd,
Whose soul has lately gone to God.
‘Ere redemption was too late,
She was redeemed at Devil’s Gate.”

It is said another woman who died of sickness was Isabella Reemer. She was also buried at the foot of the big rock and cared for by soldiers who also looked after Caroline’s grave. According to Indian legend, the chasm was created by a great fierce animal that had been preventing the Indians from hunting around the Devil’s Gate area. They, sick of all the harassment, went out to shoot the beast. After being shot at so many times with bows and arrows, the beast decided he had enough and escaped after tearing apart some of the mountain, which is what became known as Devil’s Gate.

Our final stop for today is in the state of Washington, where the grave site and memorial stands in the place of the Whitman Mission, home of Marcus 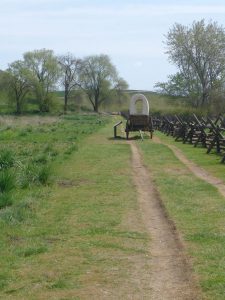 and Narcissa Whitman. They were the first missionaries in the Pacific Northwest. The Whitman’s were attacked by local Indians and killed, along with some children that lived in the home. The Indians considered this revenge as their children had died from the measles they believed the Pioneers brought. And although they failed to help cure and convert the Indians which lived in the territory, they opened the door for the State of Oregon to be established. They also braved the journey and encouraged more to follow. Their home and any of the extra buildings have all but gone now; but their letters, stories and the effect they made on history still stands tall and proud.

Thank you for joining me on the Oregon Trail. Look for part 2 on Historical Sights.

Most country folk have heard the old folk song “Erie Canal”, but not many people know the meaning [...]

Learn about the importance of Fort Laramie and how it saved many a pioneer!

Traditions are passed down through the ages, some are kept, some are lost, and others become a worldwide sensation. [...]