Most country folk have heard the old folk song “Erie Canal”, but not many people know the meaning of the song and the real history of the historical canal located in New York. As you probably already know, the Erie Canal goes on for 363 miles from Waterford to Tonawanda. It was built originally for the use of transporting goods from Albany to Buffalo, as mentioned in the song, with more profit to come from it! Today, the Erie Canal serves a more recreational purpose, however, it can still hold barges and take tourists on a pleasant journey on America’s most influential canal.

Governor Dewitt Clinton heavily promoted the idea of a canal to Congress. But many people scoffed at his dreams of New York becoming a center for business and merchandise. He did not give up and continued to press the government for funds until finally, in 1817, he was given 7 million dollars to build the Erie Canal. It didn’t take long for the work to begin, but the canal wouldn’t be finished until the year of 1825. When it did, a celebration was held in its honor. They even had a ceremonial “marriage of the waters”. Dewitt Clinton poured a keg of water from Lake Erie into the Atlantic Ocean.

Amazingly, the Erie Canal was constructed by just a few willing men who had never been to engineering school. They hired out several companies who oversaw their workers and resources. These companies employed many workers, many of whom were Irish immigrants, and supplied them with hand picks and shovels. 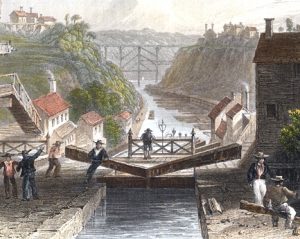 With these primitive tools the workers began the long hard work of digging a canal into the rocky earth.

Today, we can enjoy the Erie Canal for its beauty and engineering. But back then, the canal was used to transport merchandise from Albany to Buffalo. This was done with the help of horses and mules. They’d hitch up the barge or raft to the animals and ride them ahead on a road that’d set right beside the canal. This continued for nearly 100 years until the 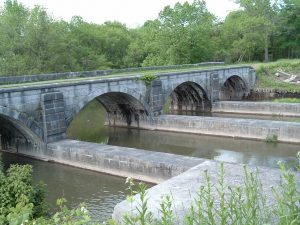 folk song, “Erie Canal” was written to commemorate the long journey taken by a mule and its owner.

Below is the Erie Canal song, along with guitar chords so you can sing this country tune at home!