Growing from the state of Texas to Central Missouri, a tree exceeding to about 60 feet in height lives in the woods with its companions, the cottonwood, the hickory, the oak, the walnut, the box elder, the green ash, and the elm.  This invasive tree is called the Sugarberry. For some people, this tree is a nuisance and hard to be rid of. For other who recognize the true potential of the Sugarberry, it a wonderful companion as long as it has a tire on a branch and plenty of berries to nibble on throughout the day. 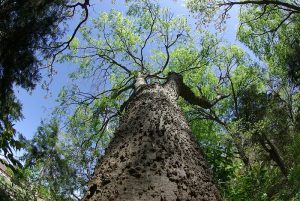 This tree is mainly found growing in Texas (as mentioned above), Oklahoma, southwest Kansas, southern Florida, north Virginia, southern Illinois, and central Missouri. This tree is actually one of the smallest kinds of the Hackberries, and gives the smallest fruit, but that does not stop it from being an extreme helpful resource for food.

The sugarberry has a lighter fruit color unlike it’s cousins, the Hackberry and the Net-leaf Hackberry. The fruit is also much more difficult to chew and has less pulp than the Hackberry, thus people prefer the Hackberry more than the sugarberry. The bark has fewer bumps, and sometimes, large patches of nothing but smooth bark are found. It is also known for its smaller leaves. This variety replaces most the hackberries growing in the southern United States, and grows exceedingly well in floodplain hardwood forests.

Although the Sugarberry only has one edible part of the whole tree, it makes up for it in size, with health benefits. The fruit ripens in early September but may remain until midwinter or even the following spring. When the oak, hickory nuts, and the wild grapes give a poor crop, wildlife quickly reach for these delicious berries. The hackberry has a date flavor to it, while the Sugarberry tastes similar to an apple. Best time to collect them is in the fall when they are easier to see. But you can also still collect them during April if the migrating birds haven’t gotten them already. 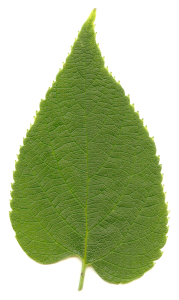 The most difficult thing about sugarberries is reaching them. Here are some ideas if you get extremely desperate. Collect the fallen fruit because it does not spoil, even when fallen. Standing on a picnic table or using a berry hook to pull the branches closer is also another useful way of harvesting. Another way (it’s dangerous though!!!) is to climb the tree and stuff any berries you find in your pocket. Spreading a tarp under the tree and shaking it will also bring the fruit down. No matter what harvesting method you use, it will always seem like a very slow-going process. But here is something to remember: a gallon of sugarberries is equal to three to five gallons of raspberries or blueberries when counting the calories!

Sugarberries have no juice, and the flavor is not good for jams and jellies, plus the pulp is nearly impossible to separate from the seed. In fact, by just looking at them, sugarberries seem quite worthless, but this is when the facts get a little more interesting. Instead of looking at it as a berry, look at it as another nut, surrounded by sweet pulp. People say that the best way to eat the berries is to just eat them whole and fresh, but for people who are not very interested in breaking a tooth or two, there are other ways in preparing the sugarberry.

Pounded hickory nuts and sugarberries with a touch of maple syrup is what many people reference to as “Exceptional!”.  Here is how you can cause many people to water in the mouth and line up for your drink.

Take two cups of mashed berries and break it up into small chunks. Place these in a saucepan with six cups of water and boil for about 30 minutes. Next, pour the pans contents into a fine screen strainer and scrape the strainers side till all the liquid has gone through. Hopefully (if the holes are small enough) the small bits and pieces of shell will stay behind, while the good stuff goes through into another container.

This will produce a thick brown-orange liquid, “Sugarberry Milk”. Extremely rich with flavor, add a dash of maple syrup and you will quickly get addicted to this filling drink. But don’t stop there, use this as a soup base instead of chicken-broth or replace any kind of liquid in recipes such as pancakes and muffin or even bread batter with this high in nutrients milk. But one of the best options, is to boil the sugarberry milk down to a syrup that is sweet and oily.

Note: One of the easiest berries to store in the world, because of their low percentage of liquid, and high amount of sugar and oil. Spread them shallowly in a tray or pan or bowl where they can sit for a few weeks to dehydrate. Once they have finished the drying, they will store easily in a plastic bag for years to come.

Tornado Survival is a regular part of an Oklahoma resident’s routine. Some have storm shelters on their property. Others, [...]

Is prepping silly or “insurance” for troublesome times?

I thought this was soooo well said by Kat so I thought I'd post it and share with you [...]

Alpha Strategy: The practice of storing extra consumable items, as a hedge against inflation, and for use in barter [...]