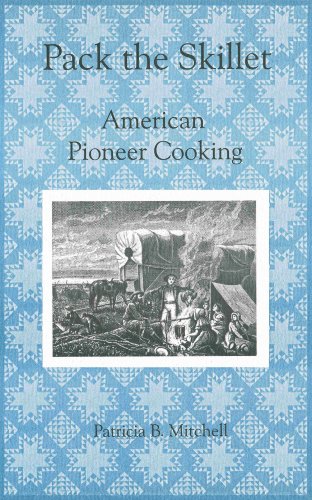 An overview of the “Westward-Ho!” philosophy in action is presented in “Pack the Skillet” by Patricia B. Mitchell. This entertaining volume tells about “culinary adventures” enjoyed by pioneer women and men as they made their way west, and after they were settled in new territory. Excerpts from letters and diaries of the day tell much about life and challenges and stilling one’s hunger. Harriet Loughany wrote:

“After a hard day’s work, we were of course hungry but to cook with a fire made of green sage brush with the sand driving into your eyes, ears and mouth, being mixed in our dough, meat and coffee was a task that we seldom want repeated. We finally abandon the fire part and crouch into our wagons and nibble hard tack.”

Mattie Oblinger told about cooking in her new home in Nebraska:

“Yesterday morning I thought I would have some cakes for dinner. I was going to make Jumbles but Giles had no rolling pin or cake cutter, so I made a plate of pancakes as they always turn out well. I had no eggs but I thought I would try it without. I tell you what I used — nearly a teacup of sugar, about half [a] teacup of cream filled up with water, a small lump of butter and a little soda, enough flour to make [the batter] quite stiff — and I never made any better pancakes in my life. Try it sometime.”

Old and updated recipes are fun for the modern cook to try. “Molasses Ginger Snaps,” “Custard Pie,” “Fanny’s Pickles,” and “Squash Pie” are good stomach-stuffers — all are included in “Pack the Skillet.”

This and other books by Patricia B. Mitchell were first written for museums and their patrons, and are now available as Kindle editions. Each of her books summarizes a food history topic, using quotations and anecdotes from early sources to both entertain and inform. She carefully lists her references to make it easy for others to launch their own research.

Since the 1980’s Patricia Mitchell’s work is a proven staple of American museum culture. Her readers love to share her ever-present sense of discovery. Her sales are approaching a million copies, and she is widely known by her web identity FoodHistory.com.

We are Amazon affiliates and from time to time we will include recommended resources like this one. We hope you'll give it a try.

Fame and acclaim have left this lovely lady little changed. She continues to write her monthly "Ozarks Cookery" column [...]

Used Cookbook We are Amazon affiliates and from time to time we will include recommended resources like this one. We [...]

Share a sense of adventure, as we travel through the historic moments that helped shape this great nation from [...]

Arab Cooking on a Prairie Homestead:

In the 1920s, Habeeb Salloum's parents left behind the orchards and vineyards of French-occupied Syria to seek a new [...]

We are Amazon affiliates and from time to time we will include recommended resources like this one. We hope [...]

Native Recipes: Gifts from the Grand

This collection of traditional recipes and herbal remedies with some traditional stories for children is dedicated to all the [...]