Worms! The Good, The Bad, and The Yucky 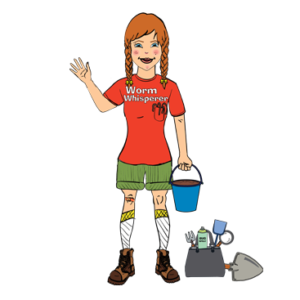 Pull up a milk crate and get comfy.  Guess what? I almost ate something icky.  My mom sent me out to the garden to pick some broccoli. I rinsed it really well and put it on the cutting board. I cut off the florets and went to look for a bowl. When I came back, there was something bright green on the board. It was a caterpillar! I took it outside and encouraged it to go and become a butterfly or moth.

I want to share with you what I learned about Worms.  They’re not just pink smooshy tubes with pointy ends.  There are thousands of different species that help our environment, make us sick, and even cause the heebie-jeebies!

Oligochaetelogy (ol‐igoh‐keet‐ol‐ogy) is the study of worms and in the Phylum Annelida are the Good Worms.    Annelid means segmented and there three common terrestrial worm groups that move and groove in specific soil environments:

Earthworms are invertebrates which means they have no backbone.  Their main organ is their super sensitive skin.  Mucus cells in the epidermal (skin) layer produce mucus to keep the worm’s body from drying out.  This also helps them move and groove through the soil.

Worms move (locomotion) with the help of setae (bristles) that come out of follicles on every segment.  In Lumbricus terrestris, there is a large setae at both ends of the worm.  The worm protrudes the setae on the posterior (back) end to keep it fixed in one spot.  The muscles in the front end contract and thrust the anterior (front) segments forward.  Earthworms can take 7 to 10 steps per minute, moving 2 to 3 centimeters.  Whoa! Slow down!

Earthworms have a mouth in the first anterior segment and eats as it goes through organic matter and soil.  The food is stored in the crop and muscular contractions of the gizzard grinds up the food.  (Did you know birds have crops and gizzards too?) Undigested food and soil is excreted through the anus as worm poop.  This worm poop has nutrients and is used by gardeners to enrich the soil.  There’s Power in the Poop!

Bad Worms are parasites that have the potential to cause disease in humans and animals.  There are thousands of species and many are transmitted because of bad hygiene.

Enterobium vermicularis, commonly known as Pinworm is the most common worm infection in the United States and Europe. It is estimated that 500 million people get infected per year!

Here’s how they roll: The adults live in the beginning of the large intestine (cecum). When the female worm is filled with eggs (approximately 11,000) she moves down to the rectum and comes out of the anus. She lays her eggs in the perianal region (the skin around the anus). She does this while the host sleeps; the body temperature is low and there is less movement. This causes itching in that very private perianal region. The eggs enter a new host through the mouth.

Did you say mouth?  Yup.  That means someone didn’t wash their hands before eating!  Pinworm is the most contagious worm known to exist.  It spreads person to person and a host can give it back to him or herself. Scratching this itch can get the eggs on the fingers. They can get under the fingernails. The host can re‐infect him or herself by putting dirty fingers in their mouth. That means someone didn’t wash their hands after they used the bathroom or scratched.

Also, scratching, down there, scatters the eggs in the air which can be inhaled. Pinworm infestations can be seen in nursery schools and kindergartens. The student comes home from school and infects the entire family.  The eggs get into everything; clothes, sheets, blankets and the even the bathtub where the infected person takes a bath. Whoever takes a bath, after the infected person, gets infected too!

How do you get rid of these pesky Pinworms?  The good news is Pinworm eggs aren’t very tough and can’t tolerate high temperatures. So, washing clothes and bedding in hot water and drying in a hot dryer will help to kill the eggs. There is also medication available. It is recommended the entire family gets treated at the same time.

There is an activity where people around the world “charm” worms right out of the ground.  This is definitely in the Yucky Worm group especially if you don’t like worms.

The first Worm Charming Championship was held in England in 1980. Mr. Tom Shufflebotham amazed onlookers with his ability to charm 511 worms out of the ground in thirty minutes. He stuck a large garden fork into the ground and hit the fork handle with a piece of wood. This sent vibrations deep into the ground and the worms came up to the surface. No one knows why the worms respond this way, but scientists have some theories that the vibrations mimic the sound of moles and shrews digging.  Moles love to eat worms, so the worms come up to escape them!

In Sopchoppy, Florida, Audrey and Gary Revell use a technique they call Worm Grunting.  They use a wooden stake called a “stob” that they pound into the ground. Then a metal stick (roping iron) is used to rub the stob which creates vibrations. The sound it makes sounds like a pig grunting. Different species of earthworms come up and the one they like to use for bait is Diplocardia mississippiensis.  The Revells enjoy educating people about worms and host an annual Worm Grunting Festival in Sopchoppy.  Fisherman love the wild worms so they also have a very squirmy bait business.

(Check out the Worm Grunting video).

By Vickie Lusby A few years back Joe & I stumbled across an amazing system for growing food. It is [...]

This is part 2 to: https://survivingtheoregontrail.com/blog/our-positive-experience-with-our-autistic-little-niece-and-organic-foods Here is a recipe to Silvia's Power Pancakes. (protein & vitamin packed "power pancakes") 1 [...]

In the News – Woman accidentally poisons family with backyard mushrooms

Hi Everyone, Our group is very supportive of forging for wild food. It is a great way to expand your [...]

Making bread at home for less than 50 cents a loaf

Homemade Tortillas (with oil, not butter)

by Nicky I LOVE homemade flour tortillas! As a child, I remember going over to a friend's house when her [...]