Life of the Young Benjamin Franklin 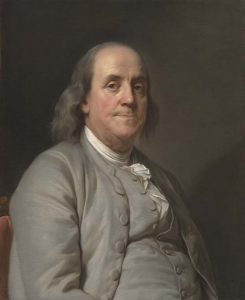 Among the founding fathers of this nation, a man who came from the most humbling beginnings became one of the most independent and prosperous men in all the colonies. Benjamin Franklin and Thomas Jefferson, the author of the Declaration of Independence, spoke out the most regarding religious freedom and the right to life, liberty, and the pursuit of happiness. In 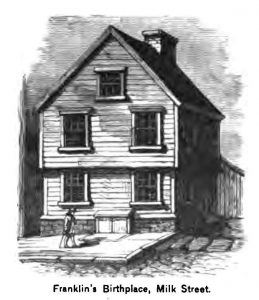 this report we will go over the early life of Benjamin Franklin.

The youngest son of a large family, Ben was born on a cold winter Sunday, January the 17, 1706. His father loved him more than any of his other sons. Josiah (His father) had come to Boston, where Ben was born, from England in 1683. After his first wife died, he married Abiah Folger. Ben had a total of 16 siblings to deal with, which would be rather difficult because most of them were much older. His father spent his time working in his soap and candle shop to support his family. They were very poor, which made it hard for Ben to get the education that Josiah wanted him to have.

Because Ben grew upon just a short distance from the rather busy Boston Harbor, he always got a good whiff of the sea. Ships from around the world were regularly making stops there to either sell or buy. At a very young age, Ben learned to swim and use small boats. Some of his earliest inventions were for the sport of swimming. The wooden flippers which would be turned into the modern day rubber flippers, and the kite experiment; he used a kite to pull him across a pond as he lay on his back upon the water.

Josiah had many ideas on what Ben should become when he got older. When Ben was just 8 years old, his father decided that he should be a minister, and enrolled him in the local grammar school. Ben learned fast and jumped ahead of the class. Soon though, Josiah realized that he couldn’t afford to send Ben to college to learn to become a minister. So instead he made him go to school to learn about writing and math. At 10 years old, Josiah again decided that Ben would do better as an apprentice in his candle and soap making shop. Ben quickly realized that he hated making candles and pouring the fat into molds. He mostly hated the smell and the long hours of the repeat of yesterdays work.

When his father noticed how much he disliked the work, he apprenticed him off to his older brother James. James owned a printing business, which turned out to be rather successful. Ben soon learned the printers trade. Although it was a lot of work, Ben was much more willing to line letters to make a page of text rather than stir stinky cattle and sheep’s fat in a large pot. But the job was not the only thing that kept Ben busy, he was also spending his time reading and learning. To get better at writing, he would copy the best authors of the time. After he acquainted himself which new words, phrases, and proper writing etiquette, Ben moved on to writing his own poems about events that he read about in his brother’s newspaper. 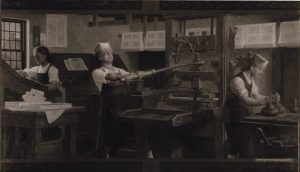 Finally, Ben decided that he wanted to publish his own article in the newspaper, but his older brother James thought he was too young and dull to do that. So, Ben took up a pen name Silence Dogood, and started writing. After finishing his articles, he would slip it under James door and wait till the morning came about. There in the newspaper he found his written document, all printed up and being sold throughout town. He continued doing this till he could hold his secret no more. When he informed his brother that Silence Dogood didn’t exist, his brother James was outraged! James then beat Ben for deceiving him.

Even after this incident, Ben grew older and obtained more and more responsibility over his brother’s press, which allowed James to have certain freedoms to do other things. Those other things got James in trouble, and soon he was thrown in jail. While James rotted in cell for a full month, Ben ran the business for him. When James was released, it didn’t take him long to get in trouble again. This time James made sure Ben was involved. They stroke out a deal. Ben would publish James illegal writings under his own name as long as James had to free his younger brother from the apprenticeship contract. However, James secretly wrote that Ben would stay with him till Ben was twenty-one, as the original apprenticeship contact stated. 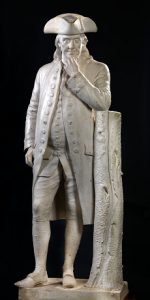 As Ben grew older, James continued to argue and beat him. Finally, Ben came to the point to where he could take his older brother’s beatings and wrong-doings no more. At 17 years old, Ben left and headed toward New York City to find a job as a printer. After traveling more then 200 hundred miles, Ben was exhausted. But try as he might, there was no one who was willing to hire him. Fortunately and by a stroke of luck, Ben heard a man by the name of William Bradford had a son named Andrew who needed help in Philadelphia. And with that, Ben decided to travel another 100 miles in search of work.

He started his life anew in Philadelphia, and after taking the advice of his minister, went to patch things up with his family. After many years, his older brother James forgave him for running away, and they once again became friends. Benjamin married and fathered 3 children. William, Francis, and Sarah. Francis died at the age of four from smallpox. Benjamin soon became involved in the American Revolution and helped Thomas Jefferson write the Declaration of Independence. He retired after a long life of work and spent the rest of life with his daughter Sarah, to help raise her children. He passed away in his sleep after fighting pleurisy at 11 pm on April 17, 1790 with his grandsons, Temple and Benny at his bedside.

More than 20,000 attended his funeral. Ben was buried next to his wife Deborah, with the simplest words written on his tombstone; “Benjamin and Deborah Franklin 1790”. As he wrote in Poor Richards Almanac “If you would not be forgotten, as soon as you are dead and rotten, either write things worth reading, or do things worth writing.” Benjamin did both.

Benjamin was born on which day of the week?

How old was Ben when he enrolled in grammar school?

What name did Benjamin use in order to continue writing for his brother’s newspaper?

James made a deal with Ben, and released him from apprenticeship.

Which of Ben’s children died at the age of four from small-pox?

Write down your favorite quote by Benjamin Franklin and what yo believe it means.

1. You are an apprentice to your older brother who owns a printing shop. You want to write articles, but he says no, so you secretly write your own paper and put it under his door. Instead of giving your name, you come up with a pseudonym and sign the paper.

2.  You come up with the invention of the century and become one of the most famous people in Pennsylvania. However, trouble arises when people start arguing that they invented it first. What should you do?

3.  The Declaration of Independence needs some signatures, but once you sign, you are in danger of getting arrested by the British. Will you take the risk and sacrifice everything for your country, or hide out in hopes things will work out?

Has anyone in your family invented something ingenious like wooden paddles or a way to speed across a pond with something as simple as the wind? How about you? Write about some of society’s problems that need a cure. Come up with a solution to at least two or three of these problems such as; a solution to traffic accidents, microwave radiation, pollution.