During the early 1600’s, the daring immigrant Henry Prentice left for the New World. This amazing adventure took place during the 1640’s, commonly referred to as the “Great Migration”. Many foreigners heading towards America endured the treacherous journey to a new land only to find there would be no peace nor rest for a long time. The new world was full of unknown sicknesses, many unfriendly natives, and life-threatening winters that killed off the majority of the first establishments.

Henry Prentice’s first wife, Elizabeth, died in 1643. After coming to the New World, Henry met Joanne Savage, and remarried in 1644. They had six children together, but their happiness did not last forever. Henry Prentice died in 1654 leaving Joanne to care for their large and young family. One of Joanne’s oldest sons, Solomon, finally married a young girl called Elizabeth around 1672. Their first son would become the great-great-grandfather of Narcissa Prentice. Somewhere along the line, the family name was changed from Prentice to Prentiss. This could have come from illiteracy or by pure accident, no one knows for sure.

Roughly three generations later Stephen Prentiss was born in 1777, in the bustling state of New Hampshire. Stephen moved to New York and married the lovely Clarissa Ward in Onondaga, New York. His oldest son was born on February 6, 1804. The young family moved to the small town of Prattsburg in Steuben County, New York. After building his family a small cabin – to which he made larger as the family grew – he established a distillery, gristmill, and saw mill. This opened up several doors and allowed him to gain experience as a joiner and carpenter. Prattsburg eventually elected him to a higher position, and Stephen Prentiss became Steuben County’s first judge.

Narcissa Prentiss was born March 14, 1808. She was the couple’s first daughter, and as she grew older, would become heavily depended on for many different things. As Narcissa grew up, many different good and bad things happened to the young country of America. At the age of 4, Narcissa would have had to say goodbye to her father who joined the War of 1812. And as she grew older, she would have heard the poundings as thousands of shovels, picks, and carts emptying the waterway that would soon become the Erie Canal. Stories of the Corps of Discovery would have already spawned adventure among her and her brothers, but even more so when news of famous mountain men and trappers reached the ears of pampered New Yorkers. But the greatest event that changed Narcissa forever would be the Second Great Awakening. Many different religions and beliefs were born during this fiery time. Inspiring leaders such as Joseph Smith, Lyman Beecher (whose daughter, Harriet Beecher became a famous abolitionist), the Fox sisters, and Charles Finney led spiritual movements which moved many hearts to a call for action.

At the age of 11 in 1819, Narcissa would find herself dedicating her life to the church and to God. She continued to grow in the love of God and in her community while the desire to spread the Gospel grew stronger. For the next five years she received a good education which girls during that time didn’t normally get. However Narcissa saw herself as much more than a student. She wanted to become a missionary! And by the age of sixteen, she made up her mind. She wrote a letter to the mission organization, the ABCFM (American Board of Commissioners for Foreign Missions) asking to send her as a missionary to the Native Americans.

The ABCFM refused to send an unmarried woman on the mission field. So, Narcissa would have to wait until she met someone who wanted to be a missionary too. As she waited, Narcissa became a schoolteacher for kindergartners. Her love for God and desire for missionary work never grew dim, but it wouldn’t be for another ten years till Narcissa finally met the man with the same dreams. His name was Marcus Whitman.

Marcus Whitman was born on September 4, 1802. He grew up poor and was sent off to live with his uncle at a young age after his father died. He earned a very good education, and returned home. His mother remarried a tanner who began to teach Marcus how to make shoes. However, Marcus didn’t see his future in making shoes. He wanted to become a minister, just like Narcissa Prentiss! But unfortunately his family was very unhappy about his plans so he decided to study medicine instead, and even apprenticed himself to a local doctor. Marcus continued to study for many years until he finally received a degree from The College of Physicians and Surgeons. Afterwards Marcus began to practice medicine and eventually met Rev. Strong who encouraged him to apply for the ABCFM to become a missionary. Marcus, with faith renewed, begged to be sent off with a Reverend who was seeking a partner to adventure with him towards the wild west. The ABCFM saw Marcus’ potential and appointed him as an official Missionary Doctor!

There was only one thing stopping Marcus from establishing a mission out west, and that was the fact that he was unmarried. One of the requirements for missionaries was to be married. Miraculously, Marcus stumbled upon the young and beautiful Narcissa Prentiss. They exchanged letters, and eventually Marcus was invited to a family dinner. That night, Marcus proposed to Narcissa! Narcissa’s dreams were finally coming true and all she had to do was marry the missionary doctor. She said yes, but their wedding would have to wait for nearly a year, as Marcus had already volunteered to go with the Rev. Parker.

Soon after getting engaged, Marcus was whisked away on a dangerous adventure towards a rendezvous in Green River, in the gorgeous state of Wyoming. Their trip was no party, for some of the participants in the caravan began to plot to murder the unknowing missionaries. They considered the rules that missionaries kept as inconvenient and intolerable. But before they could do anything, the caravan was struck with the deadly disease, the Cholera! Thankfully, Marcus Whitman either didn’t know their evil intentions, or he had a very forgiving heart. He cured them all with the help of Rev Parker. They in turn treated the missionaries more friendly-like, and brought them to the rendezvous unharmed.

Once the two missionaries arrived, Marcus met one of the most famous mountain men of all time; Jim Bridger! Marcus used his skills to help remove an arrow that Bridger had gotten in his back during an attack from Blackfoot Indians. He was quite successful, and ended up doing several surgeries on other mountain men and trappers who had problems. After helping them, Marcus and Rev. Parker explored the nearby sights for possible missions. Marcus soon became acquainted with some Flathead Indians who wanted to learn about God! This greatly inspired Marcus to return home and to marry Narcissa.

Marcus did not journey alone though. He brought with him two Native American boys. They had come to learn English and possibly serve as translators in the future. His arrival at home was far earlier than expected to be, but happily accepted. One of two boys, Richard Sakatooah, even joined the service for the wedding of Marcus and Narcissa Whitman.

On February 18, 1836, Narcissa took the name Whitman at the age of 27. She wore a black dress and sang several hymns with her sisters and a choir. As the song was nearing the end, one by one, singers stopped, leaving Narcissa to finish the song. The final verse was sung by Narcissa alone, with the words:

“Far in heathen lands to dwell. Bear me on, thou restless ocean;
Let the winds my canvas swell; Heaves my heart with warm emotion,”
“While I go far hence to dwell, glad, I bid thee,
Native land, farewell! Farewell.”

The next day, they began to prepare for their long honeymoon/trip to the state of Washington where they would establish their mission. Narcissa bid her family, friends, and home farewell, and began the amazing journey across the wild frontier.

It’s time to take a spelling quiz! Now that you’ve studied and learned how to spell these words, it’s time to test your skills with a spelling bee! Have someone test you with the following list of words. The words you misspell should be set aside for the extra Challenges and Activities.

3. Stephen Prentiss was born in which state?

4. Narcissa’s father built which building on her family’s farm?

6. Which event led Narcissa to dedicate her life to God?

7. Which organization did Narcissa write a letter too to become a missionary?

Marcus earned his degree for ministry at The College of Physicians and Surgeons.

10. Marcus volunteered to go with which Rev. on a trip to Wyoming?

11. The caravan who plotted to kill the two missionaries came down with what disease?

12. Jim Bridger got what sort of arrow stuck in his back?

(a) Steuben County
(b) District of Columbia
(c) Green River

Richard Sakatooah joined the wedding for Narcissa and Dr. Whitman.

15. How old was Narcissa when she married Marcus?

16. What was the last stanza Narcissa sang at her wedding?

(a) Far in heathen lands to dwell, bear me on thou restless ocean.
(b) Let the winds my canvas swell, heaves my heart with warm emotion
(c) While I go far hence to dwell, glad I bid thee, Native land, farewell. Farewell.

Color the following page any way you like! If you aren’t interested in filling out the coloring page, draw your own interpretation of Narcissa or Marcus Whitman. 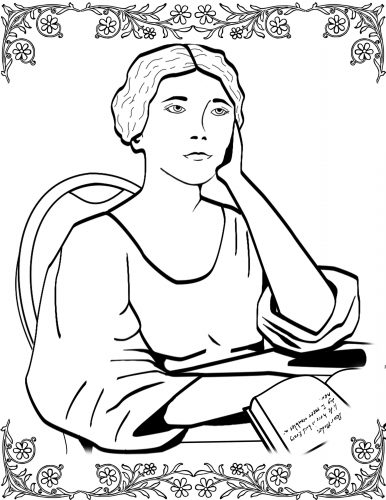 Look through the writing prompts that you have completed so far. Select your favorite one and create a short film based on your story. You can send the video to this website, and we will consider sharing it with other students. To finish the challenge, answer the following questions about your short film.